For  about nine years now, I’ve been minister of a church dedicated to serving people from other countries.  I hope a few lessons I’ve learned can help your congregation show kindness to strangers.

1. Greeting people as they arrive: Keep it simple!

It’s amazing how effective one kind word can be.  A simple, ”Welcome!”  accompanied by a smile, offers encouragement to a shy visitor without giving them more information than they need in those first seconds.

Even well-intended questions like, ”Would you prefer a large-print bulletin,” for example, might overwhelm someone who, either because of language difficulties or church background, doesn’t know what a bulletin is or won’t  be able to read it.

What a visitor needs to hear upon arriving is that they are in right place and that you are glad they came.

You already know to introduce yourself, right?

What you might not have thought of is just stopping there.  I know there is so much more to say, but in these first minutes, believe me, less can be more.

After being greeted, a visitor from abroad might nod, bow, extend a hand or say ”Hello.”  The best reply to this is to reciprocate the gesture (If you are comfortable  with it) and to say your name.  But, please, say, ”My name is….”  To say only your name without those three words can be confusing.

If a first-timer has been welcomed and knows the name of one other person, this means a lot.    (I’ve been to some churches where everyone wears name tags, making life so much easier on visitors.)

Again, obvious,  I know.   So obvious that as soon as a visitor hears the greeter’s name, he might reply with his own name without even needing to be asked.

Here’s the trick, though: try to the repeat the name until you know you are getting it right.  Some people speak softly, some names are very unfamiliar to us, and some might be downright hard to pronounce.  Repeat it when you hear it and then ask if you are saying it correctly.

When you think you’ve got it, why not use it in a sentence, like, ”New Name, I’m glad your here.”

Maybe this can’t be one of the first things a visitor hears, but they should hear it on their first visit, at least.   In many places, only after the service will there be a chance to meet the minister.  Whether they get the chance before or after, though, people coming into our church for the first time are often longing for some pastoral contact and, since they don’t know who the elders or other officers are, the leader they recognise will be whomever they see leading the service.

If a visitor has come to church hoping for such attention, then introducing them to the minister —and then giving them space—is a ministry in itself.

Ok. Technically, this isn’t something you say.  Ironcally, though, listening to someone speaks volumes.

While silence can be awkward, it can also give a visitor a chance to form the next sentence in their head.  After all, getting the courage to speak up in a new situation is not automatic for everyone.

You might find it impossible to say nothing,  and that’s understandable. But just make an effort not to fill every silent space and not to fill it so quickly.

What NOT to say: ”Where are you from?”

Even if you ask this out of genuine interest in the other person, it can come across as a very loaded question.

Some people will gladly offer the information without being asked, with a sentence like, ”Hello, my name is Eva. I’m from Ukraine.”

For others, though, the subject is complicated and painful.  They might be afraid to say that they are from a country associated with terrorists. Or maybe their home is disputed territory.  Maybe the visitor’s parents are from one country, but this person grew up in a second country and now lives in a third.  In such cases, it is not easy  for them to say quite they are from.

Finally, for some people, talk of home will make them cry.

There you have it—a few simple ways to welcome visitors. If you take a look back at these tips, you’ll notice I didn’t refer to refugees specifically in any of them.  You don’t know someone’s immigration status just by looking at them, and you don’t need to.  Welcome all visitors as you yourself would like to be welcomed.  Some who have done so have even entertained angels unawares. (Hebrews 13:2) 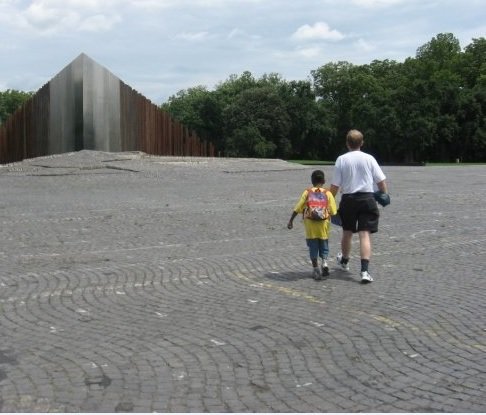 Aaron Stevens is Minister of St. Columba’s Church in Budapest, a congregation of the Church of Scotland and the Reformed Church in Hungary.

Caption for photo: The author walking in park with a child born to refugees.