The students and teachers at the Damascus school of our Armenian partner church awaited Christmas under a roof in need of repairs, in dilapidated classrooms with inadequate heating. This matters because education is of key significance when it comes to the peaceful coexistence of various groups and religions in the Middle East. Our on-the-scene reporting covers the beneficiary of this year’s fundraising by the Reformed Educational Fund in the Carpathian Basin. 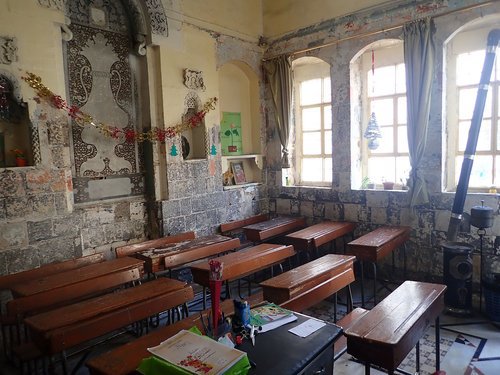 ‘I almost feel like home, the only difference being that we used to heat the classroom with coal,’ remarks a member of our delegation, after we have looked around the second-grade classroom of the Christian Elementary School of Damascus. We could hardly say anything upon seeing the peeled-off paint, the worn desks and the old-fashioned gas fireplace. Our reminiscing travelling companion even showed us where he used to sit back home – fifty years ago – in a classroom that looked just like this one.

The Christmas decorations were still up when, at the end of March 2019, our church delegation visited the Damascus-based educational institution of the Armenian Evangelical Church in Syria, while travelling in the region of Lebanon and Syria. After crossing the border, we went straight to the school, but because of the prolonged visa inspection, we missed the last lesson, therefore only the teachers were there to meet us at the schoolyard. 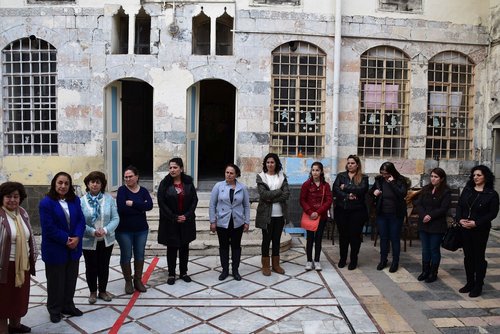 ‘Please never forget that what you are doing is one of the most important tasks,’ told them Bishop István Bogárdi Szabó encouragingly, having seen the environment they have to teach in. ‘Not only do you open children’s eyes to the world, but by teaching them to read and write, you also open their lives to the Kingdom of God.’

This work is taken very seriously indeed within our partner church. The Armenian Evangelical community is the result of a belated wave of Reformation, which reached the Middle East in the 19th century. It was founded in 1846 in Constantinople by thirty-seven men and three women – the latter fact they are especially proud of – and they could operate in the Ottoman Empire with a special permit by the Sultan. The church, which had become stronger by 1915, fled from the Armenian Genocide to Syria and Lebanon, and they are present in several cities to this day. The alliance of eleven congregations in Syria runs six educational institutions – they work with a total of two thousand children in four elementary schools and two secondary schools. Apart from building the Kingdom of God, they say these institutions play a vital role in preserving these communities and securing the long-term presence of Christians in the Middle East. 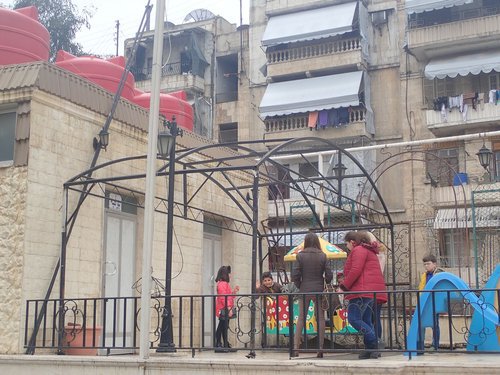 Playground next to Bethel School in Aleppo

Their institutions are located in the capital as well as in the northern part of the country. Kesab, near the Mediterranean Sea, has been populated by Armenians since the late Middle Ages, and it is home to the oldest – and smallest – elementary school of our partner church. It was founded in 1852, but at present it only has forty-three students, due to the war raging since 2011. There are four institutions in Aleppo, which is the centre of the Armenian community in Syria: Bethel, Emmanuel, the Syrian school and the so-called College. Next to their largest congregational centre, Bethel, there has been an elementary school since 1923, which has been extended into a secondary school over the past sixteen years, and two years ago – shortly after the siege of Aleppo was over – they also launched kindergarten groups. Nearly a hundred years ago they also opened a school called Emmanuel in an area populated by Muslims, the high quality of which was also been recognised on the state level. Their school located in the historical Syrian quarter is exemplary – especially in the present tension-filled months – because Armenian and Arab children attend lessons together with their Kurdish peers. 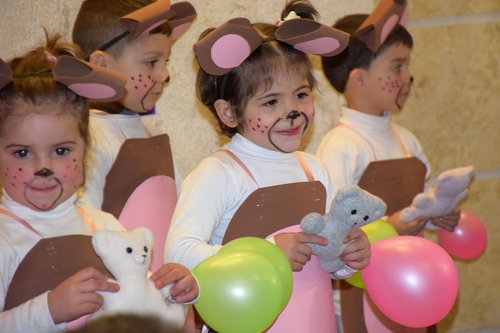 Their other secondary school is a school for girls, which has been operating since 1922 in the same building as the school for boys of the Arab-speaking Evangelical community. The so-called College is an institution for students in grades 7-12, which towers over a Muslim district, and since the war has broken out – and their school buses have burnt out – over ninety percent of their students have been Muslim children living in the vicinity. This is something they are willing to undertake because they feel it is a social service to teach Syrians of different religious convictions to live in peaceful coexistence: they do their best to win the approval of Muslim parents through their high-quality work and excellent results. Their presence and ministry sow seeds of a culture of diversity and equality in a predominantly Muslim society. The only thing that limits their activities is a significant lack of financial resources – as we could see for ourselves during our tour of the schools in dire need of renovation.

Not giving up on the capital 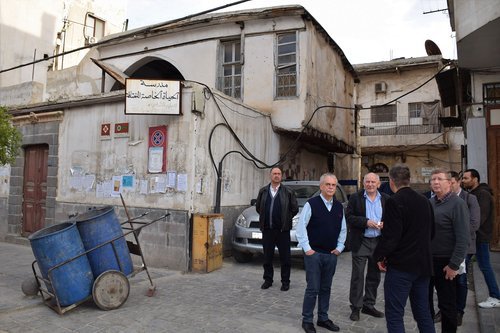 The Armenian Evangelical community in Damascus has been greatly reduced during the war years; at present the congregation consists of no more than five families, and they do not have their own pastor. And yet, the church refuses to give up its school operating in the historical quarter of the capital, because it is a priority to be present in an area which is mostly populated by lower-middle-class Christian people. The school building was formerly used for residential purposes: each of its rooms, which all open to the yard, used to house a family. The building was transformed into an educational institution in 1953, and several generations have learnt there to read, write and do arithmetic since then. In the current school year there are one hundred and twenty-seven children, aged three to twelve, taught by sixteen kindergarten and elementary school teachers. The school is also a significant adult education and cultural centre: first-aid courses, educational film screenings and public talks are organised here. 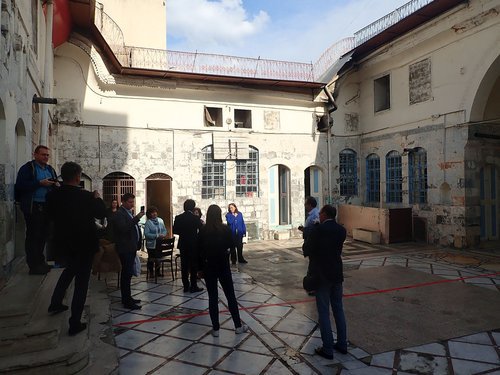 ‘We need to renovate the roof as soon as possible, to ensure that our students can learn in safe surroundings,’ said Haroutune Selimian, leader of our Armenian partner church as well as our host and guide during our tour, about the most urgent task. Just like their other educational institutions, this school was severely affected by the war. It has been hit more than once, which resulted in damage to the roof structure. The sanitary units have also seen better days, and visit to the computer room amounts to time travel: the equipment reminds us of the turn of the millennium. Upgrading these is also among their development plans, and they also hope to modernise the furniture and heating of the classrooms. The later is particularly important because, although subzero temperatures are nonexistent in Syria even in winter, buildings are rarely insulated and can easily get chilly when the temperature drops below fifteen degrees. The pastor, however, is not only focusing on the infrastructure: he also talks about their plans to improve the educational programme of the school and to ensure the continued training of the staff. 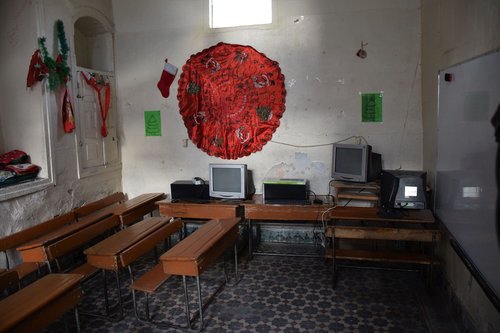 We can contribute to the rebuilding

‘I was shaken by the sight of physical damage. It is always unnerving to see senseless, or perhaps even deliberate destruction. On the other hand, the open and welcoming attitude of the teachers as well as the communities’ will to live gives us hope that the country will eventually be rebuilt, even if only slowly, over a period of decades,’ opined Tibor Ábrám, Lay President of the Cistibiscan Reformed Church District, a member of the Hungarian delegation visiting the Middle East. ‘Their schools mostly operate amid very humble circumstances, so any financial support is much needed,’ he said in our Easter article on the topic, encouraging the Hungarian Reformed community to support our Syrian brothers and sisters in any way we can. 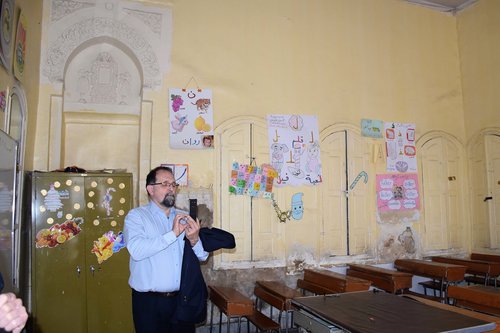 For example, we can join this year’s fundraising of the Reformed Educational Fund in the Carpathian Basin. It is ten years ago that the teachers and students of Hungarian Reformed educational institutions started an annual Advent fundraising campaign. As we have reported earlier, during the past ten years over 133 million HUF (around 420 000 EUR) has been raised this way. The sum raised by this solidarity fund that reaches beyond national borders, supplemented by the Presidium of the General Convent, has contributed to the launching, operating and development of several Hungarian-language educational institutions that exist outside Hungary. As a way of expressing their gratitude, they have decided this year to provide financial support to the Damascus elementary school of our Middle Eastern brothers and sisters.

The Hungarian Reformed Church Aid has already had two fundraising campaigns for supporting the Sunday Schools operating in Syrian congregations, the Reformed Church in Hungary has contributed to the renovation of an Armenian Evangelical church building in Aleppo, while the General Convent provides support for the scholarship programme of local church-run schools.

‘The General Convent itself does not have substantial financial resources; nevertheless we have resolved to support Syrian schools, because a significant process during the post-war period is for schools to return to a normal state, and proper school education may contribute to the aim of Syrian Christians remaining in their homeland,’ explains Tibor Ábrám, who is in charge of the Reformed Educational Fund in the Carpathian Basin, set up by the General Convent, the representative body of Reformed church leaders within the Carpathian Basin.

Anyone can send donations to the fundraising campaign initiated by students and teachers – which this time aims to support the Christian Elementary School of Damascus. Donations may be sent to the subaccount of the Reformed Educational Fund in the Carpathian Basin until 31 January 2020.

Let us get the world back on its feet

The Christmas decorations we saw in March in Damascus – which may not have been removed from the walls ever since – are topical once again. I myself still have a Christmas tree decoration made from beads that I received from a little girl, around age four, in Aleppo, during our first trip to Syria two years ago during Advent. When she, overcoming her shyness, came over and gave it to me, I thought the world has been turned upside down. She is one of the least of Jesus’ brothers and sisters mentioned in the parable, and we travelled thousands of kilometres to help her. As we can read in the Gospel of Matthew, in Chapter 25, in the parable on the final judgement, we should be giving something to eat to the hungry and something to drink to the thirsty, inviting in the stranger, clothing the naked, looking after the sick and visiting the imprisoned. And yet here she was, giving me a gift. 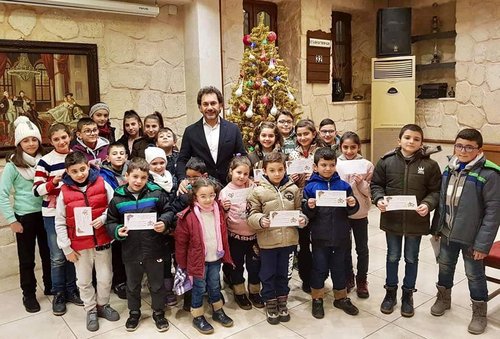 A few days ago I was browsing through social media and I saw that the Armenian schoolchildren in Aleppo had just received the small presents bought from Western church support. And looking at these images, I remembered the little girl who has started school since then, and I also recalled the thankful words of headscarved Muslim mothers who were attending a parent-teacher meeting which we happened to see two years ago. And the teachers of the Armenian school in Damascus also came to mind, the way they were patiently waiting for us in the schoolyard, and then showing us their deteriorated classrooms. Christian teachers, Syrian women, mothers, who were praying for a renovated school for their children this Christmas.