For those refugees and migrants settling in a new country, studying the language is the first step to integrating into society. But what do you do if there are no resources with which to learn?

For Somalis coming to Hungary, most of which only speak Somali and no other foreign language, this is the exact situation they encounter upon arrival. And it was for this reason that Tukale Hussein Muhyadin, a native Somali, and his language teacher, László Joachim, a native Hungarian, set about the task of creating a Hungarian-Somali-English dictionary in order to support other Somalis living and learning in Hungary. The student and teacher realized early on that there were no resources available, and it occurred to them that if they did not take the time to create the material, no one else would.

The project began in 2012 within the framework of the School Integration Program of the RCH Reformed Mission Center’s Refugee Mission, and with the funding of the European Refugee Fund has now become available for free online and in print. The three-language dictionary specifically designed for migrants has roughly 2,000 vocabulary entries in addition to a taxonomy of 200 nodes with expanded examples and uses. The online version of the dictionary has been available since November 2013 and the printed edition became ready for distribution in June 2014. 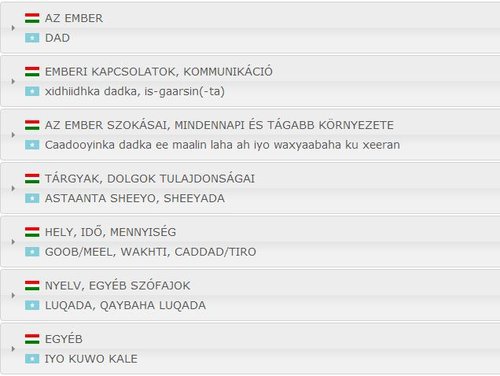 While in the beginning there was one small Somali-Hungarian dictionary, it was far from comprehensive, and it was not until December 2013 that Somali became an option on the readily accessible Google Translate. However, the user-friendly online translator is notorious for improper or incorrect translations, especially with complex, agglutinative languages such as Somali and Hungarian.

As István Endrédy from the Faculty of Information Technology and Bionics at Pázmány Péter Catholic University explains in his paper “Hungarian-Somali-English Online Dictionary and Taxonomy”:  “Google usually translates between different languages through English. For example, it first translates from Somali to English, then from English to Hungarian. These steps may include errors, a single error (in any of the steps) may impair the final translation.”

The online version of the newly printed dictionary is unique in the fact that the database allows for incorrect spelling and stemming, which is useful for people that are not yet proficient in the language, and includes a “text-to-speech” function for pronunciation purposes.

But most importantly, Tukale and László’s work has provided a resource and opened a door for future Somali refugees and migrants as they go about the difficult road of assimilation in Hungary.

You can learn more about the dictionary here, and are encouraged to give feedback, positive or negative, by contacting qaamuus.rmk.hu@gmail.com.