In January, HEKS/EPER, the aid organization of the Swiss Protestant Churches, held a conference in Zurich, Switzerland, focusing on the cooperative work with the FMEEC. Representing the RCH, Rev. Balázs Ódor led a workshop detailing the partnership and cooperation between the RCH and the churches in the Middle East through HEKS.

Since 1988, HEKS has organized an “Eastern European Day.” This one-day conference allowed for Swiss congregations to learn of the projects happening in Eastern European countries, including the Protestant churches in the Czech Republic and the Hungarian-speaking Reformed churches in Slovakia, Ukraine, Romania, Serbia, and Hungary. This year, for the 31st conference, Eastern European Day was renamed as InterChurch Cooperation and reorganized to include HEKS cooperation happening in the Middle East, namely with the churches in Syria and Lebanon. The focus of this year’s conference was HEKS presence in Syria, highlighting also RCH cooperation in special projects in Syria.

HEKS began working in Syria and Lebanon in 2016 through the church cooperation program, KiZA. The aid organization supports projects run by Protestant churches in the FMEEC by encouraging church life in parishes, strengthening the churches’ social responsibility, and promoting dialogue with other churches. HEKS supports the twelve local congregations that run the Sunday school project for 1500 children and young people from various Christian churches, as well as for other children in the neighborhood. The 160 volunteers tell Bible stories, offer arts and crafts activities, and play games with the children.

On January 19th, HEKS organized two workshops on the projects in the Middle East. The first workshop was led by Rosangela Jarjour, General Secretary of the Fellowship of Middle East Churches (FMEEC), and Angela Daghalian, 23-year-old medical student and volunteer director of the children’s program in Aleppo. Jarjour reported on the positive effects of the Sunday school project on the local congregations, as well as the children involved. Daghalian provided insight as to what the project means for the children in her local congregation in Aleppo, and share her experiences working alongside 16 volunteers preparing and leading day-programs for 120 children. 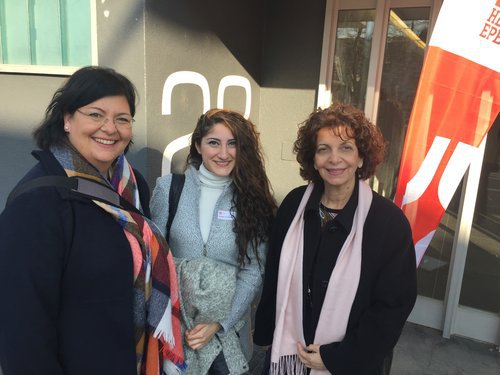 The Sunday school project provides assistance to the FMEEC member churches in Syria, catering to the needs of the children, including food, extracurricular activities, and transport. The Sunday schools provide a place for hopes and dreams to be encouraged, and children are able to worship, play, eat, share, and make friends. This ministry helps churches to become, not only safe centers, but also major cultural and educational centers for all children in need of help.

The second workshop was led by Rev. Balázs Ódor, Ecumenical Officer of the Reformed Church in Hungary (RCH). Rev. Ódor highlighted the partnership and cooperation with the churches in the Middle East, and the aid programs, through HEKS, which the RCH continues to support, including the Sunday school project, as well as the Scholarship for school kids. He also shared of the solidarity visit RCH delegates made to Syria in December 2017 and plans of another visit this year, 2019, with senior church leaders of the RCH.

HEKS created the Scholarship project in 2016 as a relief for the parents, allowing them to continue to send their children to the schools. Due to the war, school fees are becoming harder and harder for parents to pay, causing the churches schools to be put into difficult financial situations. The Scholarship project supports the ten private schools of the National Synod of Lebanon and Syria (NESSL) and the Union of Armenian Evangelical Churches in the Near East (UAECNE).

As part of the program, ecumenical guests met with senior leaders of the Evangelical Church in Switzerland in Bern, and visited the largest cantonal church, the Evangelical Church of the Canton Bern-Jura-Solothurn. In addition, HEKS has decided to increase the budget for the projects in the Middle East to CHF 300 000, and the Hungarian Reformed Church will also be contributing CHF 16 000.